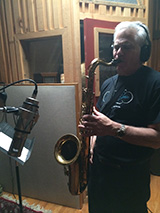 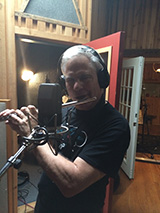 Joe Meo is a multi-woodwind player who has had a wide-ranging musical career that seemed preordained – his first instrument (a clarinet) fell out of a car and landed across the street from his house when he was 8 years old!   He has played all his life from that moment on, shelving a career in electrical engineering (he holds both BS and MS degrees in that subject) to pursue his first love of music.  He has played in numerous rock, funk and jazz bands from New Jersey to Massachusetts.  He has toured the world with the Jeff Holmes Big Band and the Ed Palermo band and has played with the Tonight Show orchestra under Doc Severinsen.  He has played with many pop artists including Billy Vera, the Pointer Sisters, the Four Tops, the Temptations, and Johnny Mathis. He has played on several cruise ships including on the maiden voyage of the Queen Mary 2.  He has played on many recordings ranging from albums and CDs to commercials. He has arranged and played the horn parts for the last two CDs by Johnny Winter, the last of which, entitled Step Back, won a Grammy award for best blues album in 2015).  His abilities on clarinet, sax and flute have allowed him to play in pit orchestras for Broadway productions.  Lately he has added guitar and vocals to his musical arsenal. He also has a thriving teaching career, teaching privately and substituting in private and public schools.  He is equally adept at all genres of music combining outstanding reading skills and the ability to improvise, allowing him to fit seamlessly into any musical situation.