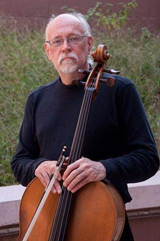 George Dewar, violoncellist, was a student of Heinrich Joachim, and David Wells at Manhattan School of Music’s preparatory division and received his BMus in performance from Peabody Conservatory as a student of Stephen Kates, and a chamber music student of Karen Tuttle. He has been a member of the graduate string quartets at West Virginia University, and University of Massachusetts at Amherst, and had fellowships to the Waterloo and Aspen Music Festivals , where he studied with David Finkel, Lazlo Varga,Yehuda Hanani, Anthony Elliot, and was also a student and teaching assistant to Frederick Zlotkin. Mr. Dewar freelances in the tri state area , and teaches privately on long island and Connecticut. He has peformed with North Shore Pro Musica, and a recital for Islip Arts Council , and has played concertos with BAFFA Symphony, West Islip Chamber Orchestra , Westchester Chamber Symphony, and with JoAnn Falletta and the Queens Philharmonia. Mr. Dewar is currently the principal ‘cellist with the Westchester Chamber Symphony and has completed a MMus in performance at Brooklyn College with Frederick Zlotkin.