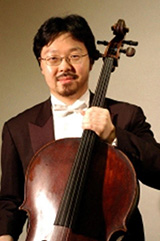 Patrick Sohn received his musical education from the Juilliard School, Manhattan School of Music and Boston University. His teachers have included Channing Robbins, Harvey Shapiro, Leslie Parnas, David Geber and Zara Nelsova. Patrick began his musical studies with the piano at the age of four and began the cello at nine with Mr. Robbins at the Juilliard School. As a recipient of fellowships, he has participated in the Aspen Music Festival and numerous chamber music festivals in the Northeast United States.

Patrick is an active recitalist with performances at Lefrak Concert Hall in New York and Pforzheimer Hall in Manhattan, NY. An avid chamber musician, he has performed extensively with the piano and strings literature as well as the string quartet repertoire. He has performed as Principal Cello