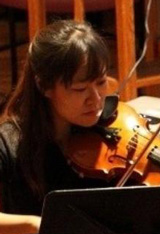 Born in South Korea, Jaein started playing the violin at age five and her first teacher was her father who is a violinist himself.  At at age six, she started studying the piano.  Jaein’s interest in music expanded to singing and she was part of the MBC Children’s Choir at age eleven and started conducting at the Andong Seoubu Church Zion Choir at age sixteen.  She was also the Principal Violinist at the Youth Orchestra of the same church.

Jaein earned her Bachelor’s Degree in Violin performance from Sungshin Women’s University in 2005 and furthered her studies at the University of Kentucky Graduate School in 2008.  Her principal teachers were Pilkun Lee, Moonsung Kim, Hoyoung Pi and Daniel Mason.  She has been working with various organizations such as the Korean Catholic Chamber Ensemble (since 2005), the Seoul Concert Philharmonic Orchestra (since 2015), and the New Seoul Philharmonic Orchestra (since 2015).  As a violin instructor, Jaein has worked with the Symphony Music School and the Socheun Teho Kwon Music Museum Academy.  She is also a volunteer teacher at the Jeongang Church Academy.

Jaein developed a great love for violin that she pursued to study violin making at the North Bennet Street School in Boston, under the tutelage of Roman Barnas.