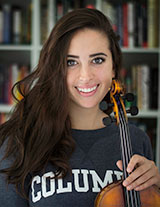 Isabel Epstein began her musical training at four years old on the violin.  By age 10, her performance credits included recitals at Queens College, Carnegie Hall, and the Manhattan School of Music.

At 11, she was enrolled in a summer music conservatory camp, Encore/Coda, at which she began her voice, piano, guitar, and music theory training.  She developed a unique love for theory and composition and began writing and recording her own music.

Isabel fell in love with teaching when, in 2006, she started volunteering as a music instructor to local elementary and middle school students.  The families she worked with eventually requested to pay her for her services, and henceforth her teaching career was born.  Word of mouth spread rapidly around the community, and by 2007, Isabel had amassed a full roster of students.

In addition to her teaching career, Isabel excelled musically and academically.  She was the concertmaster throughout her four-year tenure in the Northport HS Honors Orchestra—she additionally served as principal second in the Huntington Community Orchestra from 2009 to 2010.  In 2008, she was named AP Music Student of the Year; in 2009, she was awarded IB Music Student of the Year.  At age 16, in her senior year, she was awarded the title of Composer of the Year at the premier of her first grand-scale work, Symphony No. 1 in F minor, for full orchestra.

Isabel graduated with honors and went on to study at Colgate University; there, she fell seriously ill and took a year off before transferring to Binghamton.  At Binghamton, she continued her studies in music and neuroscience, and, by age 18, had completed the school’s entire music theory sequence.

While at Binghamton, Isabel developed a treatment method using music and neuroplasticity to rehabilitate and improve cognitive functioning.  She aspires to integrate this into other standard neurological rehabilitation practices as an alternative to invasive surgeries and pharmaceuticals.

In 2012, Isabel left Binghamton to work as a ghostwriter and record producer in addition to teaching at the New York Academy of Music.  After attending audio school at the City College of New York, she opened a recording studio in Northport, NY, and worked as a songwriter, producer, film composer, and audio engineer.  Past clients include various independent films and popular musical artists such as Ashley Tisdale, Demi Lovato, and Jem.  She is a member of ASCAP and the Society of Composers and Lyricists.

Isabel currently studies music theory at Columbia University and has just moved to the Norwalk area from Long Island.  She is thrilled to work alongside the extremely talented faculty at the Connecticut School of Music and is excited to continue inspiring young minds through music.